curtisin
June 2018 edited June 2018 in DesignFinder Chat
Limited construction area and entrenched social disparity has created the split level marketplace, the Day Market and Night Market. The Day Market is a beautiful and well-patrolled street where only well-to-do merchants and nobles are allowed conduct business. Below, the Night Market is a grimy and sun-less canal where commoners eke out a living and criminal gangs operate with impunity. However the strict separation is not complete. Secret passages, laborer access, and cellars allow for a variety of paths up and down. This ease of travel means the fights and chases spill into multi level conflicts.
Points of Interest:
A) This warehouse is a front for drugs and luxuries the local nobles sneak into the city. Evidence of the city's social disparity and rampant bribery, the city watch looks the other way.
B ) A city watch-house keeps order in the Day Market. Any criminals are dragged down to Night Market cells (see K)
C) The main ramp that connects the Day Market to the Night Market is guarded by the adjacent watch-house, "fees" are frequently collected on Night Market commoners or entry denied entirely.
D) This stable for Day Market pushes into the Night Market, but keeps the fine horses out of reach of the lower rabble.
E) Bartholomew Brae's Quality Accommodations for noble clientele is an immaculate inn with a price to match.
F) A quality good shop
G) This quality meat merchant is a front for a Night Market gang. They use view points in the adjacent alley to identify targets and a secret ladder to move between the levels. (see M)
H)  A quality enchanted item shop
I) This Day Market alleyway has a secret ladder to the Night Market, the lower entrance is concealed by fungal growth from the canal.
J) Karth's is a popular Night Market bar known for it's grumpy halfling namesake and the spiciest food in the city.
K) The city watch holding cells are open on one-side to make an example of those who do not know their place.
L) Bart's Flophouse is a filthy bunkhouse. Bart "graciously" lets his laborers stay for regular price.
M) This Night Market fish shop pulls sickly fish and other questionable catches from the canal. It also allows passage for the gang operating out of the meat merchant above. (see G) 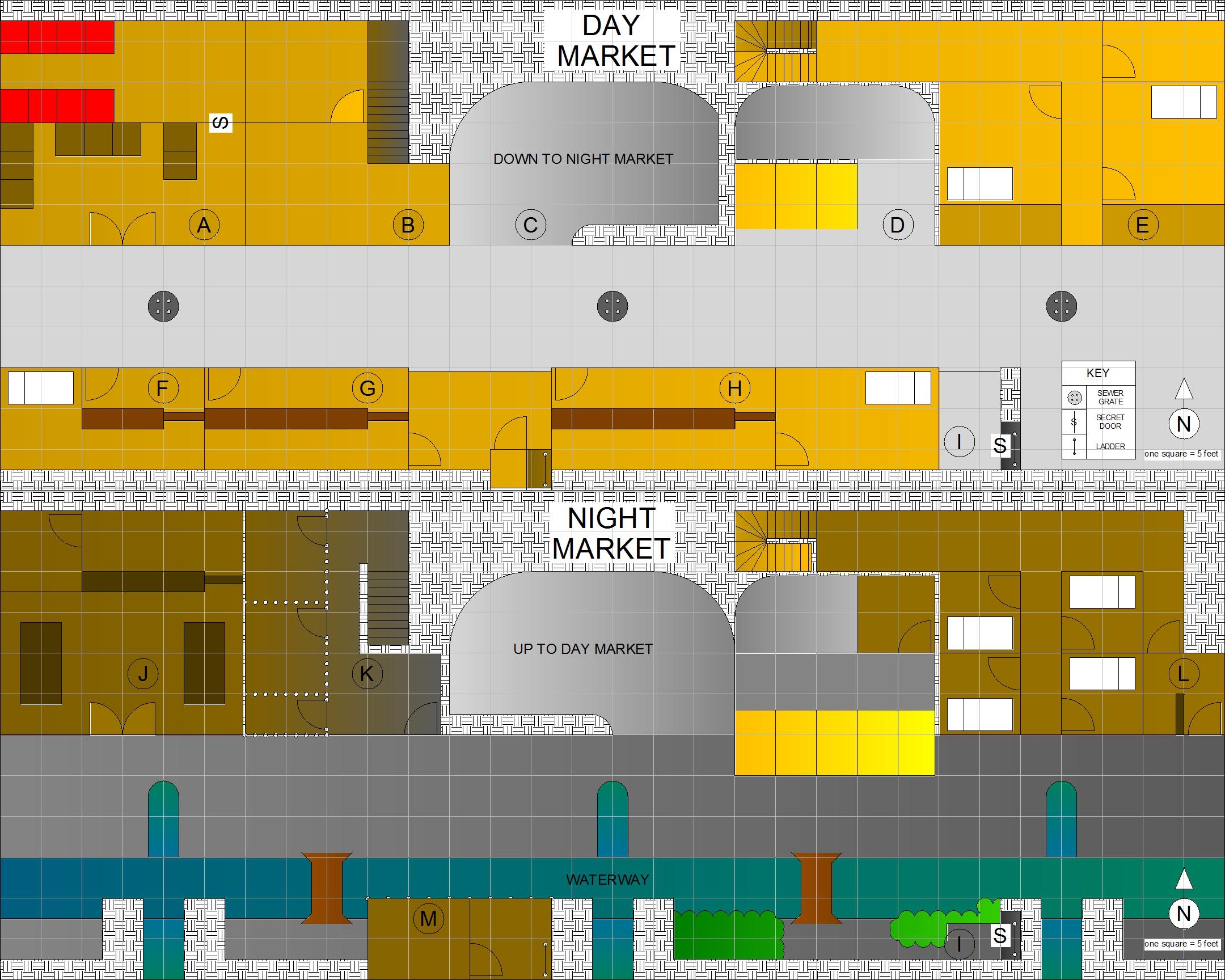