Lush green tropical vistas. A soaring mountaintop. Crystal blue waterfalls and golden beaches... Thunder-Rock Island is a sight to behold, yet it seems utterly deserted. People come to Thunder-Rock Island for many reasons, but few reasons are worth the danger of going. The large island seems to be populated solely by dinosaurs; large scaly beasts of generally nasty disposition. Many resources that have been stripped from other islands can still be found in abundance here as the island is bountiful and the dinosaurs prove an effective deterrent. Rare herbs, and outcroppings containing valuable gems are easily stumbled upon but not so easily left with.

Others come for the dinosaurs themselves. A dinosaur raised from birth can be trained to be an effective companion, and the small compsognathus is sought after for efficient pest/waste management. The raptor eggs are highly sought after, especially by druids and rangers seeking intelligent and deadly animal companions. There are rumors of a sect of druids that live deep in the interior of the island and tame even mightier beasts, but if they do exist they are not fond of conversing with outsiders.

A small amount of people attempt to visit the island simply for the sake of knowledge, ironically the most foolish of the lot. This primordial bead of life was not meant to be studied or tampered with, it only means to survive.

This beach map can be used to introduce players to the island where they face several territorial dinosaurs in a battle for higher ground and whatever else they may have came for. The ill-tempered iguanodon does not take kindly to being cut off from the game trail so near the edge of the deadly jungle, but also is not eager to run to the top of the cliffs where two pachycephalosaurs are locked in a heated head-butting duel likely to knock one another off of the seaside cliffs. Further along the trail, a stubborn ankylosaurus is trying to get a cool drink despite its fear of the water. Besides, there are nesting pteranodons just ahead and it is not keen on bothering them again. All the animals stay clear of the jungle, there is only death there. Under the leafy canopy raptors (deinonychus) patrol the treeline looking for easy prey and defending their precious nests.

Using dinosaurs statistics from pathfinder beastiaries, this is a suitable adventure for characters level 6-7. 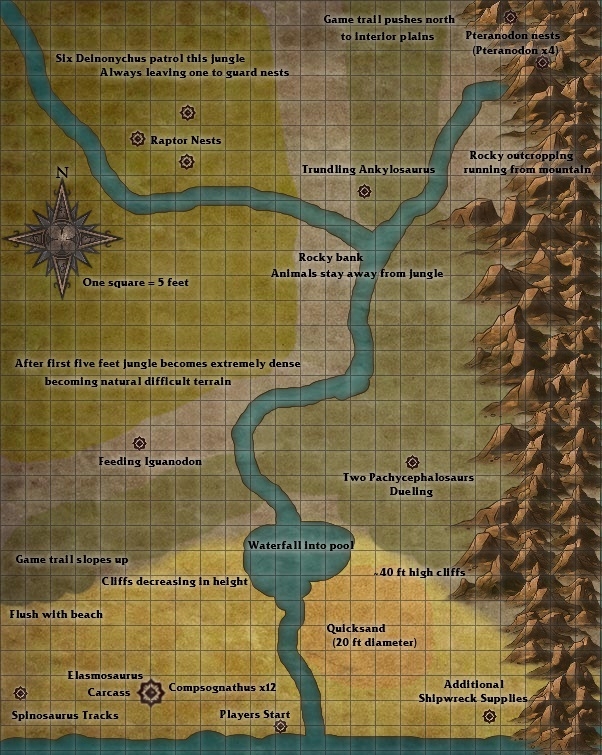