curtisin
June 2018 edited June 2018 in DesignFinder Chat
Named for the teeth that can sometimes be found along the old waterway or in the walls themselves, the gorge is said to be the resting place of a long dead black dragon. These rumors are only reinforced by the sickness that plagues miners and amateur treasure hunters drawn by the local legends.
Sheer walls raise from the valley floor and the once fast-moving river has overflowed its banks, turning the valley into a marsh. Multiple openings pierce the face of the cliff, showing where natural fissures have been enlarged. An overhang forty feet up the side of the cliff face shrouds the mine entrance in permanent shadow. Pieces of rubble and outward facing sharpened branches block the three main entrances. Two thin streams of cloudy water drain from two of the three entrances, unhindered by the primitive blockades. Close inspection shows that the water contains red flecks. All the trees on this side of the river are draped with moss, but the leaves of the trees in the marsh have turned brown or fallen completely away. A great wasp hive is in the southern copse of trees. The camp has been cleared of smaller vegetation, but light undergrowth lines the perimeter.
The camp was abandoned a year before, after multiple workers fell ill from a wasting disease. These sicknesses were not caused by some ancient dragon bones, but are a result of the miners drinking from water tainted with russett mold spores or being cut on sharp rocks containing traces of viridium. The camp, while rough, is well laid out and was not hastily abandoned. The workers took most of their tools, or anything else that may be useful, with them when they left. The camp has not yet been reclaimed by the forest, and multiple wood cottages still stand, with the ones deeper in the marsh leaning precariously. The raised foundation of the stone kitchen and storeroom has protected it from the water. Most of the structures still contain furniture, as it was coarsely made and not worth the effort of shipping it downriver when the camp closed.
A shallow channel has been cut into most of the mine floors allowing for drainage. Condensation beads on the walls and the air inside is warmer and wetter than outside. Molds, fungi, and other growths are quickly colonizing the chambers and passages. The tunnels slope upward to the south. The round chamber is a natural cavern with an ankle deep pool of water along one wall. A deep, red mold covers most of the southern wall with fresh growth.
The central mine office has two heavy, wooden doors. Inside are several desks and tables. On the north wall are two iron-bound chests that are bolted directly into the stone. Iron shutters cover the deep windows allowing a small amount of fresh air to reach the office. 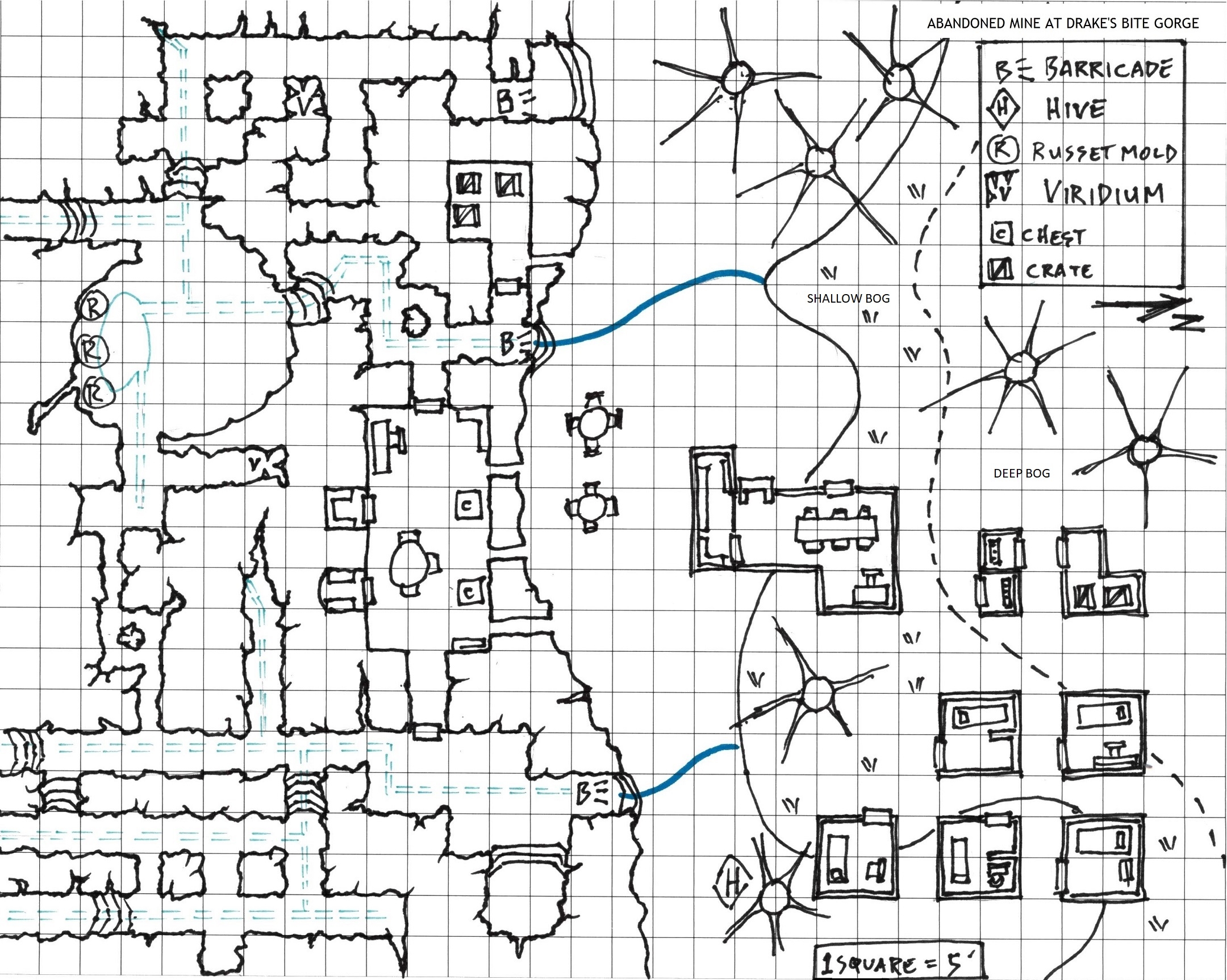