Deep within the mountains at the edge of civilisation, Kingsvale was built to take advantage of the semi-precious metals and gemstones found in abundance under its surface. Twice yearly, a caravan is taken up the mountain path with foodstuffs and other goods the residents find hard to produce, to return laden with the smelted metals and gems extracted from Kingsvale’s many mines.

The people of Kingsvale are welcoming and unprejudiced, focused on surviving and prospering in their perilous surroundings regardless of racial or societal differences. Humans, dwarves and elves all have a hand in ensuring Kingsvale continues to thrive in these difficult conditions.

The mountain’s surrounding Kingsvale are ancient and vast, home to many dangerous creatures suited to the freezing cold environs that exist throughout the area. Beyond the mountains lie The Frozen Wastes, a harsh and unforgiving landscape known for the roving tribes of savage ice trolls that inhabit its snowy plains.

Besides the various dangerous creatures found in its vicinity, Kingsvale is also known for the abundance of tombs, shrines and ruins uncovered in both it’s mining operations and the continued mapping of the surrounding mountain paths. These monuments of ages past are often littered with traps and guardians requiring brave (or foolhardy) adventurers to recover the lost knowledge and items contained within.

One such location adventurers could find themselves in is the tomb of Drakthar, the conjurer. This tomb is actually a custom demiplane accessible through a pair of old metal doors recently uncovered in the mines of Kingsvale.

The tomb’s entrance hall is revealed by a soft blue light pervading it’s interior. This large room is entirely carved of ice including the pillars, a fountain and a grand, sweeping staircase that are fitted within. A thin veil of frost coats the entirety of the room and the fountain lies dry, with a sheet of old, dried blood obscuring it’s bottom. Upon stepping into the room the light begins to fade, leaving but a single mysterious source of light seen vaguely through the pillars.

The last chamber is a quaint combined bedroom and study with various bookshelves, desks, and a stone sarcophagus in place of the bed. Magical effects, items and ancient pieces of lore scatter this once prominent wizard’s final resting place which will help the party in their further adventures. 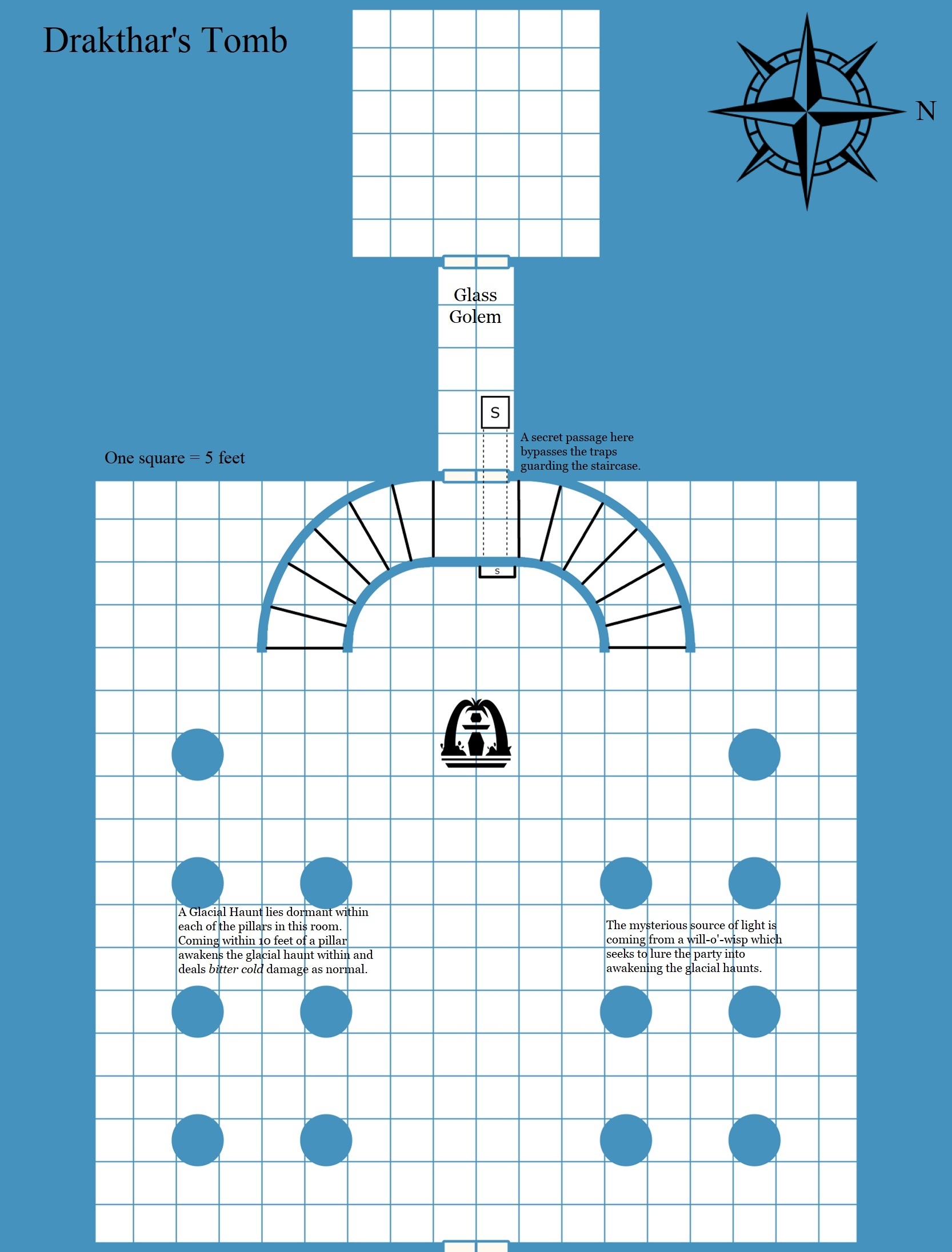